AIDS memorials from obituaries to artworks – a photo essay 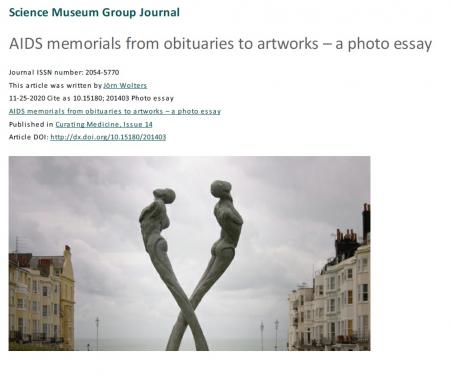 Those working in and with museums, and in relation to commemoration of lives lost to AIDS, or those working to address inclusion of people with HIV.

“Ever since individuals began to die from the disease (AIDS), memorials and monuments have been created and this photo essay charts the evolution of these from the 1980s to the present day, showing the variety of forms these have taken from informal, ephemeral and activist orientated endeavours to more formal and institutionalised projects.” (p.1)

“This photo-essay shows only a selection of an extreme variety of AIDS memorials that have evolved from spaces of mourning and healing into spaces for empowerment of survivors. In later memorials, caregivers, scientists and activists are explicitly included as well. The trend can be seen through the different categories of memorial described above.

The article is a collation of examples of different types of AIDS memorials. The article emphasises that these are a form of cultural heritage, to be managed and developed, so supporting SDG 11.4 (strengthen efforts to protect and safeguard cultural and natural heritage).

The resource can support action to combat AIDS, through awareness raising and education relating to infectious diseases (SDG 3.3) and sexual and reproductive health (SDG 3.7), managing local and global health risks (SDG 3.D), and supporting Education for Sustainable Development, for a culture of peace and non-violence (SDG 4.7).

The resource can support action for SDG 10.2, promoting social, economic and political inclusion of all people.

Click on the SDG Target to discover Our Collections Matter indicators