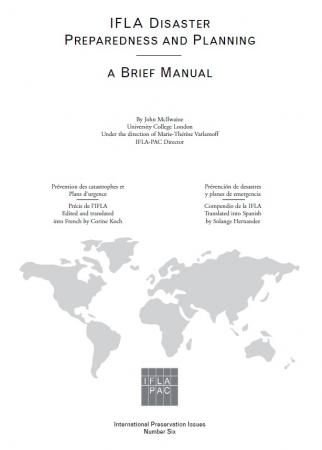 This checklist is intended for library professionals and management to be used to develop disaster risk reduction plans in their institutions.

“IFLA Preservation and Conservation Core Activity (PAC) has one major goal: “to ensure that library and archive materials, published and unpublished, in all formats will be preserved in accessible form for as long as possible… In 2003 a survey was launched worldwide among national libraries in order to know which ones did have a disaster plan. Results were alarming. Out of 177 libraries, only 39 have a disaster plan. Although 28 intend to produce one, the reason stated for not having done so before was the lack of models. This is quite surprising if you consider the number of existing publications, manuals or booklets on the question. Nevertheless most of them are written in English, some of them are extremely sophisticated and not applicable to small institutions with limited resources; consequently IFLA-PAC decided to prepare a basic manual focusing on the main points to take into consideration when writing a disaster plan: assessing risks, managing the disaster risk, getting ready to cope when disaster strikes, responding and getting back to normal are the main stages of this publication. In order to make it accessible to the greatest number of institutions world wide we publish it initially in a trilingual version (at first), hoping that this will arouse numerous other translations.” (p.5)

The resource can help to implement SDG targets linked to Disaster Risk Reduction, notably SDGs 11.5 (reducing the impact of disasters) and 11.B (adopting policies and plans for Disaster Risk Reduction), and can contribute to climate change adaptation and resilience (SDGs 13.1 and 13.3). These can help to ensure collections are well protected and safeguarded (SDG 11.4).

Click on the SDG Target to discover Our Collections Matter indicators